...they’re rapidly being replaced with much higher definition Internet Protocol (IP) cameras or the more recently developed HD-SDI (Hi Definition – Serial Digital Interface) technology. To understand how
these different cameras relate to one another it is necessary to compare their respective resolutions.

CCTV RESOLUTION EXPLAINED
Video cameras, regardless if we’re referring to those used in security systems or the really expensive variety that provide our favorite sport’s instant replays, all provide an image that is made up of small digital components called pixels. The format of every video image is defined by the number of Horizontal pixels and the number of Vertical pixels. Perhaps the simple diagram below will provide an better understanding? 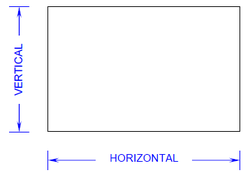 Multiplying the Number of Horizontal pixels by the Number of Vertical pixels in a picture provides the total number of pixels that define the image’s resolution. Getting back to “Industry Speak” for a moment, Digital Video Recorders (DVR’s) record typical analog cameras at a resolution that is called CIF (Common Intermediate Format) and is defined as 352 (pixels horizontal) x 240 (pixels vertical). Newer, more expensive recorders can offer analog camera recording capacity of 4CIF (2 x Horizontal – 704 pixels by 2 x Vertical – 480 pixels) and even more recent changes provide a slightly better resolution (720 x 480) which the industry calls “D1.”

If we do the math (multiply the horizontal resolution by the vertical resolution) we come up with total pixels per picture these analog technologies deliver.

Note this big number has led to the creation of another “industry speak” definition – MegaPixel – which stands for million pixels. The typical HD camera with 2,073,600 is often referred to as having 2.1 MegaPixel (MP) resolution.

The drawing (below) – a typical 3.6mm (focal length) camera example – is one we’ll use to detail how image resolution influences video quality. 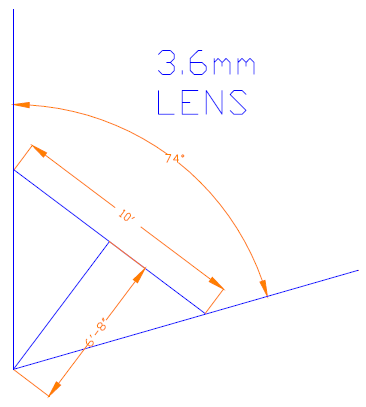 ​A typical 3.6 mm lens provides a horizontal field of view of 74°. At a distance of 6’-8” this lens will provide a 10’ wide (horizontal) field of view. The image of a person (~2 feet wide) standing at this
distance would be created from about …

When considering the post recorded zoom capability of the HD image, one can “zoom in on” the image about 2x and 5.5x while maintaining the same clarity (or pixilation – distance between adjacent pixels) as the D1 and CIF recorded images respectfully.

This difference (HD vs. D1 or CIF) is HUGE (and even greater when considering the higher resolution range of MP-IP cameras) as this level of image resolution is often the difference between identifying a subject or capturing a license plate who’s face/numbers are legible vs. one that is merely a blur.

Following are a few, real world examples that illustrate this key point in understanding HD video’s added VALUE. In each of these examples the picture on the left is from an HD (1920 horizontal x 1080 vertical pixel) camera and the picture on the right is from an analog camera recorded at either 4CIF (704 x 480) or 1CIF (352 x 240). Finally, each picture has been resized to the same horizontal width – so together, they both fit side by side on the page.

NOTE – The HD image has enough resolution that the vehicle in the background can be “zoomed in on” to read the lettering on the side of the van while the 4CIF image on the right doesn’t have enough definition to even identify that there might be lettering.

Very similar to the previous example – but no less dramatic – the HD image (below left) is post recording zoomed in on and the captured license plate is easily identified as 702773.

Now the 4CIF image (above right) very well depicts four (4) pump lanes of this convenience store’s pump line and is an example of extremely clean analog video. Even such, the image simply lacks the pixel density for any reasonable post recording analysis of the subject(s) – Note, when magnified to the exact same size as the HD image on the left, the critical information on the vehicle plate is simply indiscernible. NOTE: In this example the camera is ~50 feet from the vehicle.

Similar to the post-recording license plate identification above, these two frames detail how the HD image is able to discern the $20.00 bill while the very clear 4CIF image lacks the resolution to provide any level of accurate post recording detail.

Finally, while the previous examples have all shown 4CIF, nearly the highest analog resolution recording possible, this last pairing compares HD (left) vs. 1CIF (right) which is equivalent to most installed video security systems today, and is a dramatic demonstration of why you – as a business owner – might want to step up to High Definition video security.

The image right (even though it is only recorded at 352 x 240, 1CIF) is certainly, by most critics’ standards, a very good image. The lettering on the back of the gentleman’s blue coat (lower right) is clearly legible and it is easy to see the second subject – the man in front of the ATM machine.

The post-recording zoom of the CIF image is blurred and unrecognizable while that from the HD camera (left) is crisp, clean
​and very likely, easily identifiable by someone who knows the gent.

If (for whatever reason) you REALLY NEEDED TO IDENTIFY the gentleman at the ATM, which of these two images would you want recorded on your system?
​
Download a PDF version?            Click Here
​

Want to Reach Out To GuardDog NOW???

If you'd rather talk to a friendly warm body